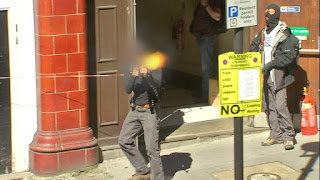 Armed police have been testing their response to a Tunisia-style gun rampage on the streets of London, as the Government warns an attack on the UK is highly likely.


Gunmen armed with automatic rifles were seen striding through the capital firing at by-standers in a simulation of an attack similar to that seen in Sousse or Mumbai in 2008.
Sky's Mark White said the exercise involved training for a scenario very similar to the attack in north Africa last Friday, in which up to 30 UK nationals are feared to have died.
He said: "The scenario is that three gunmen armed with automatic rifles have attacked members of the public. They disappeared into a building and have then come back out shooting again.
"An armed response vehicle that as part of the scenario was passing by. Two officers were in the front of that vehicle and were shot by the gunmen.
"The gunmen then went into the Tube station itself. They have been pursued by other armed officers.
"There are about two dozen ... armed officers down in the Tube station, having been involved in a simulated gun battle with the would-be terrorists."
Some streets around the Aldwych area of central London were closed to allow first responders to deal with a simulated attack on members of the public and emergency services.
Operation Strong Tower involved more than 1,000 officers in what the Metropolitan Police said was a "multi-agency exercise to test the emergency services' response to a marauding terrorist firearms attack in London".