Daredevil couple risk lives for photos as they hang off cliff edge over 3,000ft drop 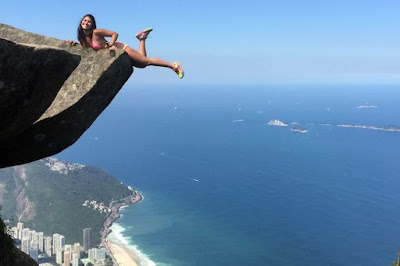 If you struggle with heights, this might not be your cup of tea.
This couple have taken their lives into their hands as they hang off a jagged rockover an almost 3,000ft drop straight into the ocean below.


With the bright blue sea and Rio de Janeiro thousands of feet below, these photos of Brazil's Pedra de Gavea are breathtaking.
But the risks taken by Leonardo Edson Pereira and girlfriend Victoria Medeiros Nader really take the wind out of you.\ 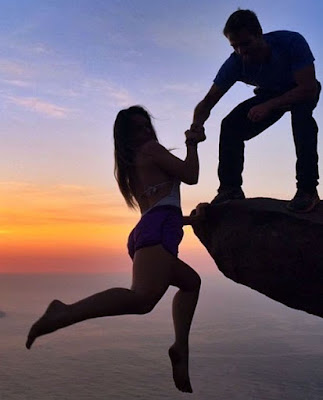 Clinging on with just one hand and posing for the camera, 23-year-old Leonardo looks just seconds away from slipping and certain death.
In another picture, his 18-year-old partner, dressed in just a skimpy bikini and hotpants, dangles her whole lower body over the rock face.
Leonardo, from Rio de Janeiro, said: "I love living on the edge.
"I know people think it's dangerous and crazy but it makes me feel alive."
"It is really high and I do just hang on using my arm strength," he continued. "I have to trust myself not to fall."
This isn't the first time Leonardo has climbed up the 2,769 foot tall Pedra de Gavea, which looks over the stunning Atlantic Ocean.
Leonardo said: "The first time I did it I was really scared. I didn't hang off, I just sat on the rock.
"The second time I was more relaxed and hung over the edge. Once I did cut my arm having to pull myself up.
"That was the only time I've been worried."
Pedra da Gávea is a mountain in Tijuca Forest, Rio de Janeiro, which is 2,769 ft up.
That makes it one of the highest mountains in the world that ends directly in the ocean.

Email ThisBlogThis!Share to TwitterShare to FacebookShare to Pinterest
Labels: news