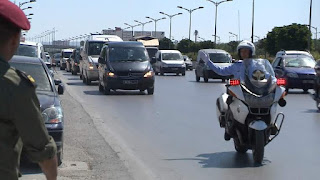 A total of 27 Britons are now confirmed to have been killed in the Tunisia terror attack, David Cameron has said.
The updated death toll comes as the bodies of eight Britons killed in the massacre at a tourist resort are due to arrive back in the UK.


They are: Adrian Evans, Charles Evans, Joel Richards, Carly Lovett, Stephen Mellor, John Stollery, and Denis and Elaine Thwaites, the Foreign Office said.
Sky sources say 30 British holidaymakers were among the dozens shot dead by Seifeddine Rezgui in Sousse on Friday.
Tunisia's health ministry says it has identified all 38 victims of the attack, and 30 of them are British. However, Britain's Foreign and Commonwealth Office is yet to confirm this.
An RAF plane carrying the eight bodies has left the country and will land at Brize Norton at around 3pm UK time.
Sky's Nick Martin, who is in Tunisia, said the plane took off at 12.05 local time.
The repatriation process is expected to take several days to complete.
The PM said he is looking at creating a ministerial committee to co-ordinate work across Government "to provide all the support that the victims of this appalling attack deserve and also to make sure that, as a nation, we mark and commemorate this event appropriately".