Baby On Small Inflatable Drifts Out To Sea 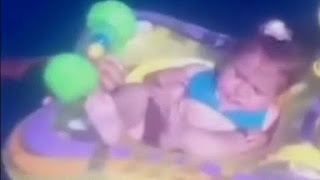 A baby drifted a kilometre out to sea on a small inflatable in Turkey after her parents forgot about her, according to local media reports.


Melda Ilgin was rescued by coastguards off the coast on Friday when sunbathers raised the alarm.
The 10-month-old's parents, who had gone to the beach in Ayvacik, were reported to be unaware of what had happened until after the rescue operation began.
Swimmers had tried to go out and bring Melda back to safety, but struggled to do so.
Onlookers applauded when the baby was returned to dry land and handed to her relieved mother.