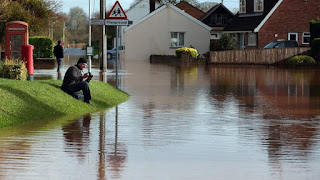 People preparing for one of the warmest weekends of the year so far should be ready for the possibility of heavy storms, forecasters say.
The temperatures are unlikely to reach the levels of Wednesday when Heathrow recorded 36.7C (98.1F), but thermometers on Friday could hit the high 20s in southern England, in central areas and south Wales.


On Saturday, some areas in the south and east of England could go even higher, with most areas in the north, Wales, Scotland and Northern Ireland seeing the mercury rising into the high teens or low 20s on both days.
But the Met Office is warning that the high temperatures could be followed by spectacular storms which have the potential to cause flash flooding.
Large parts of England and Wales have been put on yellow alert, with a "be aware" severe weather warning running from 7pm on Friday to noon on Saturday.
Further thunderstorms are predicted for Sunday across Scotland, with showers in many other parts, when the temperatures are likely to be cooler and closer to normal.
The Met Office said: "Isolated heavy, and possibly severe, thunderstorms are expected to develop on Friday evening across parts of England and Wales.
"These are likely to become more frequent later and spread northwards towards southern Scotland. Some torrential downpours are possible leading to localised surface water flooding, with large hail and frequent lightning also possible hazards."