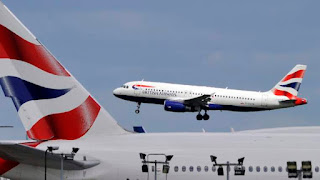 A stowaway has died after falling from a British Airways jet onto a shop in southwest London.
He and another man are believed to have clung on to the passenger plane as it flew more than 8,000 miles from Johannesburg in South Africa to Heathrow.


The second man, aged between 25 and 30, is in a serious condition in a west London hospital after miraculously surviving the ordeal.
He was discovered alive by staff at Heathrow.
The victim died as the Boeing 747 came into land over Richmond at around 9.30am on Thursday.
He reportedly landed on the roof of NotOnTheHighStreet.com in Kew Road.
A spokesman for the firm said: "Officers and the London Ambulance Service attended and found the body of male on the roof of the premises.
"The death is currently being treated as unexplained but early indications are that the body may be that of an airline stowaway.
"At this time there is no evidence to link the death to the discovery of a stowaway in the undercarriage of a plane at Heathrow Airport, however this is one line enquiry into identifying the deceased and the circumstances of his death."
British Airways described it as a "very rare case" and said it is working with police in London and Johannesburg to establish the facts.
A Scotland Yard spokeswoman said: "Officers and the London Ambulance Service attended and found the body of a dead man on the roof of a business premises.
"The death is currently being treated as unexplained.
"A post-mortem examination will be held in due course and inquiries are ongoing to establish the male's identity. No arrests have been made."
One flight expert said there were security questions to be answered.
Flight International magazine consulting editor David Learmount said: "If these two were neither airline nor airport staff and somehow managed to get on a flight then it becomes a serious security issue. Just how did they get (on the restricted) airside at the airport?"
There have been previous cases of stowaways falling from planes in the Heathrow flight path area in southwest London.
In September 2012, Jose Matada died after falling from the undercarriage of a Heathrow-bound flight from Angola on to a road in Mortlake, about a mile from Richmond.
The 26-year-old from Mozambique is believed to have survived temperatures of up to minus 60C for most of the 12-hour flight, an inquest heard.
He was "dead or nearly dead" by the time he hit the ground.
In July 2013, a suspected stowaway from Turkey was found frozen to death in the undercarriage of a BA jet from Istanbul to Heathrow.
He died after facing temperatures of minus 60C during the four-hour flight.