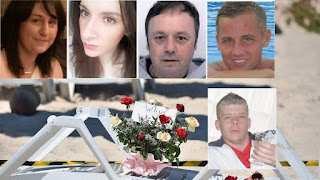 Three generations of one family are feared to have been killed in the Tunisia beach massacre, it has emerged.
Joel Richards, 22, and his uncle Adrian Evans, 49, died together when Seifeddine Yacoubi opened fire on sunbathing tourists.


The attack, which has claimed the lives of at least 15 Britons, has been described as "the most significant terror attack on the British people" since the 7 July bombings in 2005.
Joel's grandfather Patrick Evans, 78, is also feared dead, while his 16-year-old brother Owen survived the attack in Sousse.
The family members were keen supporters of Walsall FC and the club - saying it was "devastated" - has changed its official Twitter account to show a picture of the four together following the team at Wembley in tribute.
Confirming the latest death toll, Foreign Office minister Tobias Ellwood said that number is still expected to rise as "several more" people have serious injuries.
British police have flown to the resort to help identify victims and consular teams are at hospitals and hotels looking after those affected.
The FCO has also warned travellers of further possible attacks in the country.
Worried relatives have taken to social media to appeal for help tracing family members who had been staying in the resort, while thousands of holidaymakers have been fleeing beach resorts and heading back home.
As that exodus continues, details are emerging of those who lost their lives when Yacoubi opened fire with a Kalashnikov he had hidden inside an umbrella.