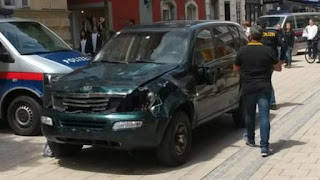 Three people have been killed and 34 injured after a man drove a car into a crowd of people at high-speed in a busy shopping street.


The green SUV was reportedly going about 62mph along Herrengasse in Austria's second biggest city Graz and hit a cyclist and another person before striking the crowd.
The motorist then got out of the car and attacked passers-by with a knife before he could be subdued, according to the Kleine Zeitung newspaper.
Doctors on the scene attempted to save the lives of at least one of the victims, but nothing could be done, it was reported.
A seven-year-old boy and a woman were thought to be among the dead and the suspected driver has been arrested.
The governor of Graz, Hermann Schuetzenhoefer, described him as a "deranged" lone assassin and said the lunchtime attack was deliberate.
The suspect was a 26-year-old Austrian of Bosnian origin and Mr Schuetzenhoefer said he was "mentally disorientated" and acting alone.
He said 10 people were seriously injured and at least one was critical.
Police said there were no indications of a terrorist attack, and the suspect was apparently distressed over personal problems when he targeted his victims.
Four helicopters and 50 ambulances were sent to the area, according to the newspaper. The authorities were said to be stretched because of the Austrian F1 Grand Prix which is being held at nearby Spielberg.
Police set up a cordon in the area where the incident occurred.