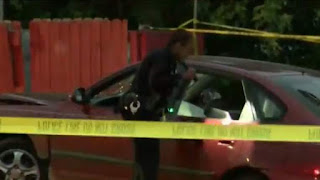 Police are investigating a shooting on a basketball court while a street party was taking place, leaving one person dead and nine others hurt.


Gunshots were heard at around 8.45pm on Saturday and up to 400 people were attending the community event in Detroit.
One man is in a critical condition, while injuries to five men and three women are non-life-threatening. All are aged between 21 and 46.
The man who was killed was 20-years-old, police said. He has yet to named as relatives are still to be informed.
Officers believe two semi-automatic weapons were used in the attack and are searching for suspects.
They have made no arrests so far.
Journalist Priya Mann, at the scene, told Sky News: "It is an active scene with the police searching the basketball court and surrounding area for any evidence of the shooter.
"Seven men and three women were shot. There were many children here when the gunfire broke out but thankfully no children were hurt.
"It was a neighbourhood community event where people were trying to provide their children with something to do, including playing basketball, but it ended in gunfire."

Email ThisBlogThis!Share to TwitterShare to FacebookShare to Pinterest
Labels: USA