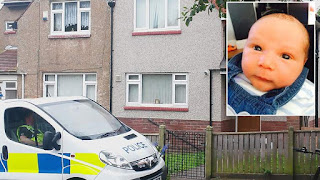 The mother of a three-week-old boy who died after being bitten by the family dog at his house is said to be devastated.
Reggie Blacklin was taken to hospital after officers were called to the property in Sunderland at 4.15am on Saturday.


But the infant later died.
A family member, who did not want be named, said the boy's mother was not in the house when the youngster was attacked by the small terrier.
He said she had been at a family event following a bereavement, and had returned late at night to find the distressing scene.
But he added she never left her son alone with the dog and was devastated by what happened.
He also said the canine, which was usually kept outside in an outhouse and was never left alone with children, was good-natured.
Police said a 30-year-old man who was inside the property at the time of the incident had been arrested.
The dog was removed from the property, was currently in kennels and was likely to be destroyed, according to officers. They added the dog posed no threat to the wider public.
Superintendent Gillian Mitchell of Northumbria Police said: "Our thoughts are with the family of the baby at this difficult time. We have officers supporting them and will continue to do so throughout our enquiries.
"We recognise this incident is concerning for residents and officers will remain in the area to and offer residents reassurance and answer any questions they may have.
"The family dog was quickly taken from the house and is now in secure kennels."
"Our enquiries will continue to establish the full circumstances of how this happened as clearly there are concerns around the care of the child at the time of this tragic incident."
Paul Tweddle, who lives opposite the home, told Sky News: "It' horrendous, isn't it. Words can't describe how the family must be feeling.